A One-Sheet for Zeroed Hero's Love Letters to a Mannequin 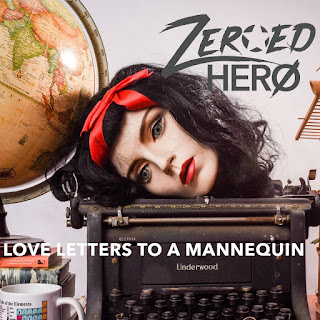 Y'all, I've got a bone to pick with the late-stage rock and roll world of the early 21st century, and it can be summarized as thus: for a music genre ostensibly born out of poor, working-class country and blues, we as a culture sure seem to focus on artists about as far removed from “working class” as possible, don't we? It seems like somewhere in every rock and roll “success” story these days, the rags before the riches are a curtain hiding some sort of Wonderful Wizard/Svengali/what have you holding the purse strings. How compelling is the musical journey of a young country songstress when daddy buys out a share of the record label that signs her (sorry, Taylor)? It's easy to spend years honing your craft when your modeling industry magnate papa's got the safety net strung (am I right, dude from The Strokes?). I propose that we jettison those nonsense narratives and cushy, coddled rock stars and focus on the real rock and roll success stories out there – that we drop these “heroes” and lift up the supposed “zeroes” who are doing the real heavy lifting out there in the musical world. As luck would have it, I'm writing this because I've got some for ya, and – hey, what a coincidence! – they're Madison, Wisconsin's Zeroed Hero.

Let's get the full disclosure out of the way – the main dudes of Zeroed Hero, Dean Kesler and Chris Franczek, go back with me almost 30 years now. We played ridiculous classic rock covers in high school, as you do when you grow up in a tiny farming town like Who Cares, WI, worshipping the dudes on the cover of Guitar World. (We had those first three Black Crowes singles on lock, yo.) So I feel like I have a unique perspective in telling the story of these two rock and roll lifers. Yeah, “lifers” is the term I'd use, even though most of those lives have been taken up by the supposedly un-rocking pursuits of family and boring-ass day jobs. I'm making a point here. See, “real life” in the traditional sense doesn't leave a lot of room for dreams of rock 'n' roll stardom, so whatever time does get dedicated to music has to be for the love of the game—and these two love the game like few others. As adulthood became marriages, kids, careers, and the grind, the dream of putting out an album took hold and sat just under their skin like an invisible rash that festered for years. Finally, once a series of personal losses skinned Kesler's soul raw, that rash finally exposed, our heroes could finally scratch.

Love Letters to a Mannequin sprung from a series of journals written by Kesler as letters addressed to those who had left, made corporeal with riffs informed by the hard rock that's fueled both Kesler and Franczek since those farmboy days. In a world obsessed with genre-splicing and overly-hip categorizing, Mannequin focuses squarely on populist, blue-collar guitars and hooks. This isn't indie rock, alterna-bluegrass, alt-folk, or post-black-metal ska-core – the opening chords of “Precipice” proudly announce that this is straight-up, 70s/90s-styled, no-bullshit hard rock. It's technically a debut album, but these songs betray some long years honing some serious chops. Backed on record by guitarist Dain Di Mattia and Paul Kennedy keeping the beat, tracks like the driving “The Physics of You” crackle with energy and maturity far beyond your typical debut, with moody but triumphant lyrics to match. For all the pain that kickstarted this self-funded, completely DIY project (take that, “Kickstarter” bands!), the thrill of creation by far overshadows the angst. (The live band boasts scene vets Steve Truesdell on guitar, keyboardist Alison “Little Margie” Margaret, and drummer Tony Kille.)

And that's the real triumph here. In a world that foolishly gauges artistic success in dollars, cents, and units moved, isn't the existence of art in and of itself the real success? For every one of those conveniently bankrolled rock stars, there are thousands of supposed nobodys out there clawing through the grind of ordinary, everyday life in order to fuel something extraordinary, something fueled by love and the pure desire to create and to friggin' rock. Love Letters to a Mannequin is just another kickass, well-executed independent hard rock disc, and dammit, that's what makes it special. If that's not the definition of zero as hero, I don't know what is. Blue-collar rock 'n' roll for anyone and everyone...courtesy your friendly neighborhood Zeroed Hero.

Posted by DrAwkward at 8:46 PM