The Starving Artists of the 1%

I haven't done a ton of music-related writing in recent months. There've been lots of reasons for this--my day job saps my energy (the most consistent blogging i've ever done here took place while i was unemployed four years ago--go figure, eh?), all my available writing time has been taken up with WrestleMania liveblogging--but mostly, i've been in a rut of non-enthusiasm fed by a feeling that most people just aren't interested in reading about the bands i want to write about. I mean, who would want to hear about Motherfucker or Le Butcherettes or Hungry Man when stuff like this is out there in the world?

This sub-twee nonsense is a New York band called The Prettiots, and they live in a world that is almost completely removed from the musical universe populated by my peers and friends. I say "almost" because sometimes the two universes crossover like a Marvel vs. DC one-shot, although it's really more like Marvel vs. Achewood or DC vs. your local indie cartoonist who gets stocked at House of Heroes because It's Important to Support Local Art. One of those world collisions happened earlier this month, when The Prettiots traveled to South By Southwest in the hopes of getting "discovered" and "making it," a trek chronicled in part by a piece in the New York Times:

Weaving down from New York to Austin, Tex., in a minivan will cost the Prettiots about $1,000 in gas, plus $3,000 to rent the van with insurance. Hiring someone to manage the tour will be $1,500. Cheap hotels along the way: $500. And once the band members arrive at the music marathon on Tuesday, they will stay at an Airbnb accommodation, which will run them another $2,500 for four nights — the going rate, as the city is overrun by thousands of visitors.

All told, with incidentals and a $15 per diem for the musicians, the trip will cost the unsigned group nearly $10,000, said Asif Ahmed, the Prettiots’ manager, who is fronting some of the cost himself. “When you’re a band this young, it’s a necessary evil — spending money to eventually make it,” he said.

The article's point is valid on its surface--SXSW, as everyone knows, is crammed with "starving artists," in the Times' words,  playing for little to no money while hoping to catch someone's attention. But how starving can a band be when they have access to $10,000 to blow? In a spot-on response to this article, Deerhoof's Ed Rodriguez astutely observed, "The people they chose to speak with were so unlike any musician I’ve encountered in the past 20 years that I’m left wondering, where do they find the sources for these stories? Is this your realtor’s son’s band? Did the famous movie director you spoke with for your last interview have a daughter who recently recorded a demo?"

You're close, Ed. The "struggling" Prettiots--whose manager and publicist (who are working for hugs, i guess?) are interviewed in the Times piece--came into the world a few steps past the starting line. Their drummer is Rachel Trachtenburg, who became a bit of a name at the turn of this century as the child drummer of the mom/dad/daughter/slide projector quirk outfit the Trachtenburg Family Slideshow Players. She has her own Wikipedia page that you can use to find out what modeling agency she's signed to. But she's not the rich one in the band--that'd be singer Kay Kasparhauser, aka Kay Kasparhauser Goldberg, daughter of record industry superman Danny Goldberg, whose memoir, Bumping Into Geniuses: My Life Inside the Rock and Roll Business, was reviewed by the same paper that profiled his daughter's band several years later.

Did the famous movie director record executive you spoke with for your last interview have a daughter who recently recorded a demo?

Now, i'm not begrudging privileged rich kids an opportunity to make a living in the only world they've grown up knowing. What are they gonna do, process mortgages? But to go back to Ed Rodriguez's piece, "I just feel that the world I live and work in is being acknowledged less and less." Media outlets like the New York Times present the stories of bands like the Prettiots or that goddamn Pomplesmurf band like that's just how it's done if you're going to "make it" (whatever that means) in the music biz today (and more to my point, that "making it" is a worthwhile endeavor in the first place). Ya gotta spend money to make money!

And they're not wrong--it's just interesting that more and more, the bands gaining mainstream recognition are the princes and princesses of the one percent. The guys in LMFAO are the children of Motown founder Berry Gordy. That band Haim? Their dad was a pro soccer player, which allowed his kids to run in the sort of circles that would allow them to get spotted by Jenny Lewis and The Strokes' Julian Casablancas, whose own father John is the founder of Elite Model Management, which employs...Rachel Trachtenburg.

How ever are those starving artist Prettiots ever going to get discovered?

But hey, whatever. Let them have their weird world of privilege and wealth, where spending mom and dad's money on a manager and a publicist and a sweet van is a sound business investment. To go back to Ed, there's more than one way to run a band, and there's nothing saying a band full of rich kids can't make compelling art (whether or not it's art i can relate to? Meh...). But consider this:

We live in a nation where the middle class is in serious decline, and mobility between social strata is more difficult/impossible than ever. As we rail against the 1% on Wall Street, we gleefully consume the art of their kids and prop up a cycle of music made by the children of the people who are in many ways responsible for that declining middle class. Hell, if there was ever a "middle class" in the music industry, even the Prettiots' manager admits at the end of that Times article that it's "completely gone." (Whether or not he realizes which class he's in i shall leave to your imagination.) If there was ever a time when the mythology of Axl Rose stepping off the bus from Indiana onto the Hollywood strip and going from rags to riches rang true, that time is up. There are two "music industries" now: the one we've been discussing here, and the vast, messy, marvelous morass of truly independent, locally-based musicians in towns all across America, who will never "make it" and couldn't care less if they did. (If there still is a "middle class," it's populated by smart, brilliantly-talented and delightfully strange bands like Deerhoof, who have spent their adult lives busting ass and hustling and doing their own thing without the help of managers or mogul parents. Is there a new generation of younger bands clawing their way to that level on a strictly DIY basis? I think they're still out there, but i don't think i'm wrong in thinking they're few and far between.)

So the next time you're thinking of spending your hard-earned dollars on new music, think about where that dollar's going to go. Hell, your local school district isn't exactly getting their arts funding increased year after year, you get me? Frankly, your money will go to more immediate use in your local music scene and will likely fund bands that are much more enjoyable (mostly--i mean, we have some pretty lame local bands in town too, and not coincidentally many of them seem geared toward "making it," which, ha, you live in Milwaukee) than some trust-funders in cut-off shorts rhyming "texting" with "texting" and poorly lip-syncing in a video directed by Richard Kern of all fucking people how the hell did THAT happen? 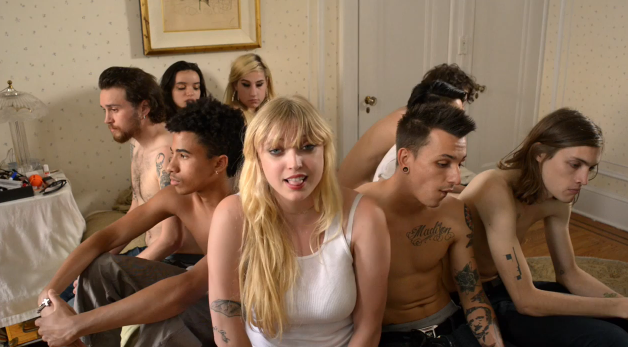 From "Death Valley 69" to this, apparently

"But DJ--those local musicians you're talking about are just glorified hobbyists, aren't they? They couldn't possibly be putting out music as good as the stuff that Big Music Writers are talking about. If they did, they'd be just as famous as The Prettiots are probably going to be. Obviously you're just jealous because bands you don't like are getting more attention than you."

I dunno. If you play "Shiny Destination" by the rutabega back to back with "Party Rock Anthem" by LMFAO and seriously think that the Gordy kids actually recorded the better song, well, i'm not sure what to tell you, other than to get happy, because The Prettiots are totally gonna get signed off that SXSW run, so you're gonna be up to your ass cheeks in their records before too long. Terrific news! Isn't it great when young, struggling artists finally get their due through sheer hard work and determination?
Posted by DrAwkward at 9:56 PM